Grateful for a Boston Marathon on Patriot’s Day 2022

Home / Grateful for a Boston Marathon on Patriot’s Day 2022 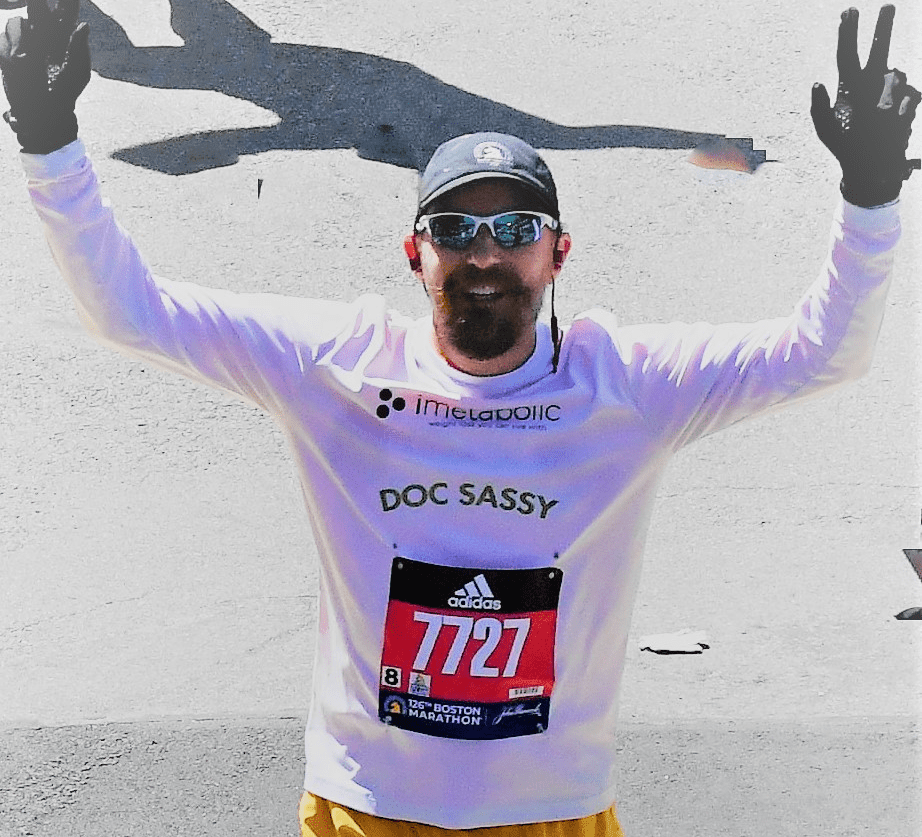 If you did not see the finale of the 2022 Women’s Boston Marathon, check it out on YouTube, a spectacular race and finish. I love this quote from the champion, the amazing Peres Jepchirchir. “I was not expecting to win. But I’m feeling grateful, and now I can say that I believe in myself more.”

I am lucky enough to serve an amazing group of people, our patients who are making a difficult journey to improved health. I sometimes hear our patients speak of believing in themselves more after they are given a chance and after their health starts to improve. Facing surgery, recovery, and the work to improve health are hard things. Battling challenging health problems like obesity, diabetes, and incontinence can be dispiriting, but with the right treatment, it is most gratifying to help people “win.”

It’s always a bit dangerous to write anything at all down immediately after running a marathon because of the brain fog. Case in point: if you ask any distance runner to compute her projected finishing time based upon specific mile split times, she could provide an accurate answer within a few moments. But try that same question during mile 20 of the marathon, and it’s totally impossible. Brain chemistry literally does not compute.  Curiously, published research indicates distance running is actually good for the brain and may prevent dementia.

It has been two bleak years of no Boston marathon running from Hopkinton to Boylston Street on Patriot’s Day, so a lot of us runners felt more than a little gratitude just to be there. It was no surprise to see the enthusiastic crowd cheering on the runners a bit more fervently than usual. I thought the signs were funnier this year: “All toenails go to heaven.” And “You run better than the supply chain.” Plus a few I won’t repeat.

I kept thinking all day how grateful I was in this post Covid-ish era that we could actually run. And further, just grateful to be able to run, grateful to my wife, training partners, my surgical partner, grateful my various injuries have quieted down enough to let me race, and grateful to the thousands of volunteers, security and law-enforcement people, race organizers, and the entire people of greater Boston who make this crazy thing what it is on Patriot’s Day.

There aren’t a lot of premier sporting events in which an amateur gets to run out on the field and compete in front of the same cheering fans as the professionals. No matter how good a half back I might’ve made in the backyard scrimmage, there’s zero chance that I would ever walk out onto the grass in pads at a real NFL game, or drive a Formula One car in front of the teeming grandstands, or dive to the grass in a full World Cup soccer stadium. But amateurs take center stage at the Boston Marathon. Some 500,000 fans all along the 26.2 miles of the race cheer the professionals who tear along the course first at hypersonic speeds, but they also stay to cheer on the rest of us, celebrating that we can all do hard things.

And it is loud. Starting with the scream tunnel, the Wellesley College women turn up the volume. And it’s no quieter throughout the entire climb of Heartbreak Hill, or anywhere in Brookline, and certainly not the last couple of miles in Boston proper. I’m grateful that everybody has the day off in Massachusetts on Patriot’s Day.

This year the race unfolded with near perfect weather, something else to be grateful for, given the memories of the “monsoon” year in 2018, and the year after when it was 80 degrees and 100% humidity. The storms of the day before and the storm of the following day were nowhere to be seen. The sun was shining as we got off the bus in Hopkinton, and at first there was none of the usual biting headwind for which this course is notorious. The Star-Spangled Banner sounded amazing, and the flyover was pretty darn cool as the C130 pilots each dipped a wing in tribute.

The downhill parts from Hopkinton through Ashland are seductively fast but punishing on the quads and knees. A few miles in, every runner starts thinking they might just break that personal record because of the effortlessness of the descent and the adrenaline. That does not last. The crowds in Framingham were the most boisterous I’ve ever seen with a lot of decibels and some hilarious signs. Cruising past Wellesley College and the screaming into the dreaded Newton Hills means taking stock of how those quadriceps are feeling after the downhill pounding. Heartbreak Hill is more a culmination of four significant climbs through Newton. It can break the soul of a runner who is feeling spent after the third ascent only to begin the long, grinding climb of the next. The absolutely deafening crowd support felt like magic though, and the summit came a bit more easily.

You would think that once the summit is behind you and you’ve hit the 21-mile mark, the rest should be a breeze. But for some reason those last five miles are some of the toughest anywhere, and that biting headwind makes itself felt. I was grateful that the crowd just got thicker and thicker. The volume goes way up as you run through the student body areas in Boston College, through Brookline, and into Boston. It’s hopeless to try to hear anything on your headphones at this point, better to just switch off and enjoy the craziness. Then, there are few turns as special as the left onto Boylston Street with about 600 yards to go to the finish line of the Boston Marathon. Fatigue disappears.

I was lucky enough to live in Boston for part of my surgical training, and the whole city is extraordinary, steeped in a heritage of independence and pugnaciousness, the kind of thing the British in the 1760s learned was untamable. Yet, what comes across every time I am back is this immense generosity, and every runner in the Boston Marathon feels it. From the Uber driver to the barista to the waiter, what one receives is best described as genuine shared joy. They feel proud of the Marathon, proud of Patriot’s Day, proud of their city. And we get to share in their pride.

For runners, it’s the Super Bowl. Only we regular people get to run out on the field in front of all the screaming fans. There’s a meaning in there for all of us regular humans, including everyone I’m lucky enough to serve with surgery so they might thrive in their lives. Sometimes people battling chronic conditions like obesity, diabetes, or incontinence lose hope and forget there could be a second chance, and even a crowd of people cheering them on. More often than not, we get to hear another person say something along the lines of what Peres said: I was not expecting to win. But I’m feeling grateful, and now I can say that I believe in myself more.